series, and the Haunted Library series. Dori has also been a ghost writer for the Boxcar Children and

other popular series. When she’s not writing, she enjoys reading, board games, walking her dog, and

playing with the Seattle Mandolin Orchestra. She grew up in southern Minnesota, spent 19 years in

Iowa, and now lives in the Seattle area. 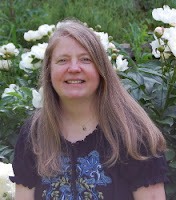 Dori, what inspired you to write your first book?

That was a long time ago! 😊 My first book was the Great Tooth Fairy Rip Off and I guess I was inspired by the kids who lived in the house behind mine. I was working on a short story for a magazine and I could hear the neighbor kids playing. It sounded like the little brother had lost his first tooth and all the kids were bragging about how much money they’d gotten from the tooth fairy. I started thinking about what would happen if this little boy didn’t get as much as the other kids got. What might he do? That became the Great Tooth Fairy Rip Off.

Who are some Authors that you admire?
I read and enjoy many books by many different authors, but I try not to “admire” other authors because that can start a dangerous spiral of comparisons.

What is your writing process? (Outline, start in the middle, scenes, etc.)

I usually outline. Then I start at the beginning. I tend to revise (a lot!) as I’m writing. The downside to that is it takes me a while to write a draft. But the upside is it tends to be a pretty clean draft. That’s not to say I don’t revise after I have a draft. I revise a lot! I will revise until my editor says I can’t revise anymore. I love the revision process because then I have words I can work with. The blank page scares me.

What was your most unusual/funny/heartwarming experience as a writer?

I think the most heartwarming experience I’ve ever had was when a 5th grader raised the money for my author visit all by herself. I didn’t know that’s what she was doing. She was a fan of my Monkey Man books and she e-mailed me and asked if I’d visit her school. She wasn’t the first student to ask me about school visits. I told her the same thing I told the others: I would love to visit her school, but an official invitation has to come from an adult at her school, not from her. I thought it that was the end of it. It usually is. 😊 But a few months later, I received an official invitation from the school. And they told me they thought I should know that this student wanted me to come so badly that she raised the money for my visit herself. You can still read about it in her own words right here: http://www.kidswriter.com/wp-content/uploads/2013/10/Elises-guest-blog.pdf

Congratulations on winning an Edgar Award! What made you decide to write mysteries?

Thank you! I’ve always loved mysteries. Reading them and writing them. I was in high school when I was first aware of the Edgar Award. I worked in my city library in high school and I was shelving a book by Joan Lowery Nixon, who was one of my favorite authors. The cover of the book said she was an “Edgar Award winning author.” So I looked up what that meant…and dreamed of winning that award myself one day.

Have you written one particular book that you love more than the others?

No, that’s like asking me to choose between my children.

The Haunted Library books are fun to read. What gave you the idea for writing them?

It was actually book 6 of my Buddy Files series. I had created this family of ghosts that I thought would live in the school where Buddy, the hero of my Buddy Files series, was a therapy dog. He’d be the only one who could see and interact with them. But my husband thought my story was too much about the ghosts and not enough about the dog. He said, “If you want to write a ghost series, write a ghost series. But this is your dog series. This book needs to focus more of the dog.” He was right. Also, I did want to write a ghost series. So, I took that family of ghosts out of the Buddy Files and gave them their own series: The Haunted Library.

What are the challenges of writing series books?

I love writing series books, but I think my biggest problem with them is sometimes I want to do something in a later book and can’t because it would be inconsistent with something else I’ve already established in the series. You can’t go back and revise previous books once they’re already published, so you’re limited by what you’ve already written.

The best advice I have to offer is: never give up! It sounds pat, but it’s true. Never give up is the secret to becoming a published writer.