A Writer in the Library


As children’s writers, we are always reading and learning from other writers. My visit to my local library today resulted in some great finds. 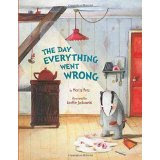 The Day Everything Went Wrong by Moritz Petz.

This is a delightful story with a great message, presented in a perfectly NON-didactic way. It’s a good example of how to accomplish this feat, which many writers find difficult to do. Badger has so many things go wrong, that he sets out to complain to all his friends. But instead, they start complaining to him and he helps them solve all of their problems. He returns home to a happy turn of events and the day turns out to be a good day after all. 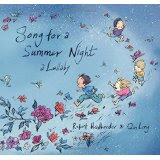 Song for a Summer Night: a lullaby by Robert Heidbreder & Qin Leng

This soft, lyrical lullaby offering is a great example of a cumulative rhyme as well as the use of onomatopoeia. Children peer out their windows to see all the night creatures, from fireflies to raccoons. While the rhyme is sometimes strained, and flowers don’t make noise, this still works as a predictable book that children will want to read again and again. 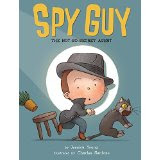 This is a great way to teach young children that even if you don't always do things right, you should never give up because "the secret to spying is never stop trying." There's a lesson here for parents, too: Instead of telling his child the secret, the father gives the child the opportunity to solve it himself and discover the lesson on his own. The cat's expressions are priceless and looking for the spider on every page adds another layer to this clever, well-done book. For a writer, it’s a good example of how much can be packed into a very sparse text. 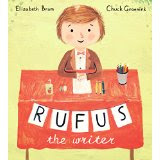 Rufus the Writer by Elizabeth Bram

Writers will love this book! Rufus decides to sell stories instead of lemonade and he gets his ideas from his friends who show up at the story stand. No money is involved; Rufus trades his stories for the items his friends trade for them. They also serve as his story prompts. This book will not only help children learn how to get ideas for stories but it will spark ideas for grown-up writers, too.