One of my favorite quotes is, “Luck is what happens when preparation meets opportunity.”

The Roman philosopher Seneca could have been referring to my journey as a published children’s book author.

My story has a tragic beginning, but a beautiful, new ending.

Claire left behind her parents and a younger sister and brother who loved her very much, and a chocolate Labrador puppy she wasn’t too sure about.

She also left behind a passion for books and reading. Claire was never far from a book, and often used reading as an excuse to get out of chores. Often her dinner got cold, as she begged to read “one more chapter, please Momma?”

We encouraged her passion from birth. Every night while reading to our children, I would go to that back flap of the book. As a freelance writer, I thought it was important that they learned about the authors and illustrators.

Soon after her death my husband Brad and I felt compelled to honor Claire in a way that was true to her. We kept coming back to books and reading, yet couldn’t quite get our heads and hearts around anything but getting through the day.

Then a moment of divine intervention, karma, pure luck, or whatever you want to believe happened.

Six months after I gave her “one last hug” while she walked off to her campsite, we were on a flight to my oldest niece’s wedding in Jacksonville. There, in my seat pocket was an in-flight issue of Time Magazine. Slightly tattered, the cover intrigued me.

For within was a story about former First Lady Laura Bush and her involvement with the Texas Book Festival. I’ve always been a huge fan of hers, so I read on. What resonated with me was the fact that the TBF featured Texas-born authors and illustrators, or who had written books set in the Lone Star State.

Wham! From all those years of teaching my children about all of you, I’d discovered a way to honor her, as well as all of your amazing work that brought such joy to our family.

I turned to my husband sitting across the aisle, and with tears in my eyes, I said, “Read this article. This is what we are going to do to honor Claire.”

Although we promote Claire’s Day as Northwest Ohio’s largest children’s book festival, it is Ohio’s only book festival dedicated to children.

And, now into our 15th year, we are no longer just a day. Not that we ever were.

Claire’s Day has always featured a dozen or so of our region’s most prolific authors and illustrators. And, a highlight of the day, is our C.A.R.E. Awards - Claire’s Awards for Reading Excellence. Given to children who are selected by their principals as being the most improved readers in their schools, the awards include a special certificate and a coupon for the recipient to choose his or her very own book from the selection authored or illustrated by our special guests.

For the first few weeks of May this year, over 20,000 children at 43 schools will witness the magic of a school visit by one of our guest writers and artists.

And I’ll be amongst the featured authors this year.

In 2007, while speaking at Claire’s Night, our fun reception for grownups the night before the festival, I shared that I had written my memoir. In the audience was Anne Margaret Lewis, who was not only author, but owner of Mackinac Island Press. She had just written and published Hidden Michigan. They were looking for an Ohio writer to pen the Buckeye State version.

Hidden Ohio was such an amazing introduction into the world of being a children’s book author. Well received by educators, librarians and families alike, Hidden Ohio was featured as the 2012 Ohio Arts Council Governor’s Awards Book.

It taught me how much I enjoyed researching and presenting material in a way that children and families would enjoy.

I continued to write, conduct school visits, created a social media presence, joined a critique group, and all the other steps one needs to do to become published, even after the fact. 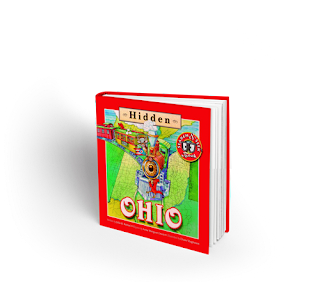 I met Michelle Houts at the reception prior to the 2009 Books by the Banks book festival in Cincinnati. She had just had her first book published as well, and after becoming instant friends, vowed to help each other from becoming one-hit wonders.

Michelle and I connected once again at the Northern Ohio section of SCBWI the fall of 2013. I was in the midst of seeking re-election to our City Council (I was approached to serve a year before. I did not actively seek this role originally. Are you sensing a theme here?) and trying to establish a succession plan to Claire’s Day.

Michelle told me about an exciting new series for middle grade readers. Ohio University Press was seeking proposals for their biographies for young students. I responded, “Wow, that sounds like something I’d be interested in.” Michelle thought I’d be perfect for the project, and provided me with the initial contact information.

I walked away from the conversation thinking, “What the heck did I just get myself into? I’ve never written middle-grade, much less a project of this magnitude.”

Once again, I jumped in, with every ounce of my being.

Missing Millie Benson: The Secret Case of the Nancy Drew Ghostwriter and Journalist was released last fall. I’ve enjoyed nice reviews and feedback from critics and readers of all ages. 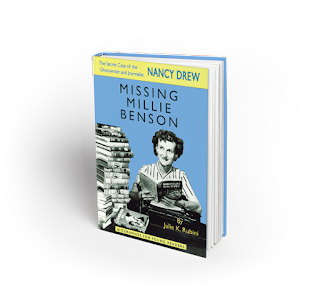 I’m under contract for two more works with the series. One is in the midst of edits, the other due this December. I’m revisiting a YA manuscript and other PB and MG works that have sat latent on my computer for years, just waiting for me to bring the characters out of cyberspace.

Claire’s Day has successfully merged with Read for Literacy, I’m enjoying my third year on Council, and have awesome, loving relationships with Brad and our two children, now starting their own lives. They’ll both come join us at Claire’s Day, helping to hand out awards in their sister’s name.

It is no surprise to me that as I wrap this up, my Pandora cranks up with Lucky by Jason Mraz and Colby Caillat.

I am. And blessed.

Julie K. Rubini is the Founder of Claire’s Day, children’s book author and serves on Maumee City Council. She is the recipient of a Jefferson Award, the YWCA Milestone Award, and UT Distinguished Alumni Award for her efforts to promote literacy and create lifelong readers. For further information, feel free to visit clairesday.org and julierubini.com.
on 4/21/2016 1 comment: Links to this post